Home » Open Source For You gets bigger, crosses 600,000 fans on official Facebook page!

Open Source For You gets bigger, crosses 600,000 fans on official Facebook page! 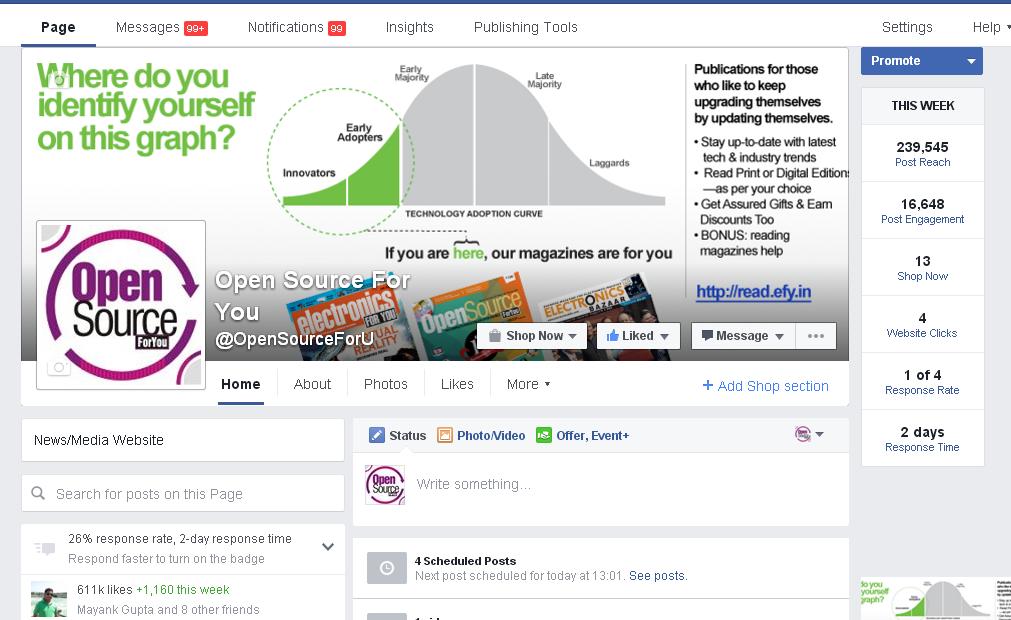 Open Source For You, Asia’s only open source publication, has expanded its presence on social media by surpassing 600,000 fans on Facebook! Owned by the EFY Group, the publication has both print and online versions.

The Facebook page of Open Source For You offers feature stories, interviews, news and tutorials directly from the OpenSourceForU.com website. It also provides electronics and IT updates from other EFY Group properties, including ElectronicsForU.com.

Announcing this wonderful achievement, Rahul Chopra, editor, Open Source For You, said, “We are honoured to have 600,000 techies connected with us through Facebook. When we first set up the page, we were told that Facebook is only used for personal updates. But, our Facebook communities have proved that it can be a good platform for people to discuss seemingly ‘professional’ issues such as open source, as long as they are passionate about these.”

Stories through the Facebook page of Open Source For You reached more than 450,000 people and received over 120,000 engagements in the 30 days ending on May 20, 2016. Countries from which likes were majorly reported included India, Indonesia, Pakistan and the US.

Open Source For You

Open Source For You (formally known as Linux For You) was launched in February 2003. It is a magazine dedicated to open source, and targets techies ranging from CIOs and CTOs, IT managers and software developers, to power users and budding engineers. The goal of the magazine, its website and its social media communities is common: to accelerate adoption of open source across the globe.

Since 1969, the EFY Group has become synonymous with information on cutting-edge technology. Today, this renowned media group is spread across eight cities in India, and caters to over two million techies spread across the globe.

Its print publications not only reach every nook and corner of India with a mailing list of over 6,000 zip codes, but are also read by techies in other South Asian countries like Nepal, Pakistan, Bangladesh, Sri Lanka, Bhutan and Afghanistan. The Group is also amongst the few Indian publishers to have its publications distributed in Singapore and Malaysia.

The online communities of the Group provide tech content to readers from all across the globe.