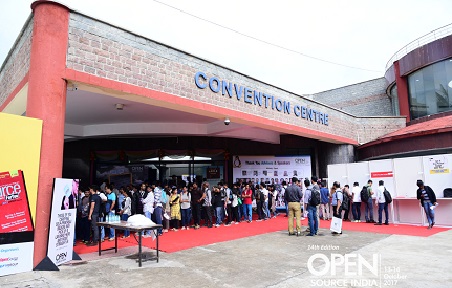 BENGALURU, October 27, 2017: The EFY Group, India’s leading tech-media group and also the
organiser of Open Source India 2017 event, today announced that the 14 th edition of the event,
which happened on 13 th &amp; 14 th of October, 2017 at NIMHANS Convention Center, Bengaluru, was the
most successful one in the history of the event. Graced by a total unique footfall of 2,367 visitors
over the two days, the event boasted of 70+ industry and community experts coming together to
speak in the 9 conference tracks and 14 hands-on workshops.

“We owe our success to the active participation of the community and the industry. It’s exciting to
see the event which had a handful of exhibitors in its initial stages, grow into an event where the
who’s who of Open Source are demonstrating their solutions to the audience. I hope that we will
continue to keep making this event even more exciting and make it one of the biggest Open Source
events across the globe,” said Rahul Chopra, Editorial Director, EFY Group.

Delegates looking to buy workshop passes on the spot were disappointed, as all the workshops were
sold out through online bookings even before the commencement of the event. Workshops like
“Self-Service Automation in OpenStack Cloud”, “Building Machine Learning Pipelines with
PredictionIO”, “Analyzing packets using Wireshark”, “OpenShift DevOps Solution”, “Make your First
Open Source IoT Product”, “Tools and techniques to dive into mathematics of machine learning”
drew a lot of interest from the techie audience.

“We would like to thank our sponsors including Microsoft, IBM, Oracle, Salesforce, 2 nd Quadrant,
Wipro Technologies, Zoho Corporation, Digital Ocean, Suse, Siemens, Huawei and others for their
valuable participation and support to the event. We look forward to having an even bigger showcase
of open source technologies with the support of our existing partners as well as many new stalwarts
from the tech industry,” said Atul Goel, Vice President of Events at EFY.

Adding to this, Rahul Chopra said, “With the overwhelming response of the tech audience and the
demand for more sessions, we have decided to expand the event starting from the 2018 edition. The

event will now be a three-day affair instead of a two-day one. This means more tracks, more
speakers, more workshops and more knowledge sharing on open source. We have already
announced the dates for the next edition. It’s going to happen right here, at the same venue, on 11 th ,
12 th &amp; 13 th of October, 2018.”

About the EFY Group:
Over the last four decades, the EFY Group has become synonymous with information on cutting-
edge technology. Today, this renowned media group is spread across eight cities of India, and caters
to over two million techies spread across the globe. While EFY Group has been organising events
since 2004 when it launched LinuxAsia (now called Open Source India), its events division got fully
established with the launch of Electronics For You Expo in 2011. Now, the group boasts of a strong
portfolio of events including India Electronics Week (IEW), ELCINA-EFY Awards and Open Source
India. Starting 2015, EFY has started organising many co-located events under the umbrella of India
Electronics Week. In 2018, IEW will play host to five co-located shows including EFY Expo,
IoTshow.in, LEDAsia.in, T&M India and EFY Conferences.