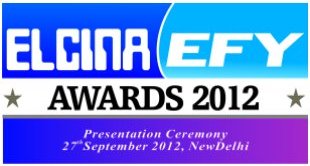 Both ELCINA and EFY Have Been Set up for More Than 40 Years With the Common Objective of Promoting Electronics Industry in India, Including Electronics Hardware Manufacture and Services

The industry came together on 27 September 2012, at the India Habitat Centre, New Delhi for the award ceremony where dignitaries from the Department Of Electronics and Information Technology, Government Of India, were also present to felicitate the talent and interact with them for the growth of the industry.

The coveted awards were instituted in 1976 to encourage the industry to excel in various fields, growing exports, highest standards in quality, sustainability through environment management, pursuing innovation through R&D, business excellence, and entrepreneurial excellence.

These awards also recognised thought and business leaders for their individual efforts which have propelled the electronics industry to greater heights by presenting the ‘Electronics Man of the Year’ Award. Over the years, eminent personalities like Ratan Tata, Narayana Murthy and Azim Premji have been chosen among other industry icons who truly deserved this honour.

The ELCINA-EFY Awards for 2011-12 were presented by chief guest Dr Sam Pitroda , Adviser to the Prime Minister on public information infrastructure and innovations and the man behind the Telecom Revolution in India. Raising concern over the increasing electronics imports of India, Dr Sam Pitroda , said, “Today, our electronics import bill surpasses the oil imports bill. We cannot afford to ignore indegenous manufacturing any more. For this, we need the required ecosystem. This can be created only by giving boost to local manufacturers.”

However, Dr Pitroda was hopeful as he said, “There is no other alternative for a country of 1.2 billion but to take up this challenge and build its own manufacturing base. The government has given us a good manufacturing policy, it is giving the required push to the local industry, but now the industry has to come forward and take some risk in starting manufacturing. I believe the road ahead is tough but we need to walk on it if we need a new India.”

The Guests of Honour at the function were J Satyanarayana, IAS, Secretary, DeitY, Government of India; Rajkumar Dhoot, MP ( Rajya Sabha ) and Dr Anup K Pujari, IAS, Director General of Foreign Trade. J Satyanarayana also said that the government is aware of the challenges being faced by the electronics manufacturing sector and has initiated appropriate policy measures. “We are sure that with the implementation of these policies the manufacturing sector will progress rapidly and will achieve higher value addition,” he added.

T Vasu, Director, Tandon Group and President of ELCINA said, “This could be the golden decade for electronics in India with demand galloping at 20-22 per cent per annum and expected to exceed US$ 400 bn by 2020 from $ 75 bn in 2011-12. The Government and industry had worked together for last 3 years to formulate an excellent Electronics Policy which had been approved and it could work very well to stimulate manufacturing and upgrade our capabilities putting us on a growth path.”

The concept of the awards was appreciated far and wide. Arun Gupta , Managing Director, NTL Electronics India Limited, praised ELCINA and EFY group for organising such an event by saying, “I think ELCINA is the only organisation in the country which does these awards and they partner for these awards with EFY, which I think the largest publication house in the country that writes about electronics. It is a very good effort because it encourages the industry, inspire them, give strength to do better.”

Vijay Gujarathi , Director/Vice President – Operations, EOS Power India Pvt Ltd, had a success story to share. He said, “I have been a part of the ELCINA EFY awards from last four years now. Prior to that, my company had no name or brand in India, but after winning the awards for four consecutive years, we are seen as an established brand in the world of electronics. Thanks to EFY for doing such a good job in promoting players like us.”

The awards were instituted in 1976 and this was the 37th year in succession, when these awards were presented to recognise excellence in electronics manufacturing. Speaking on the occasion, Ramesh Chopra , Vice Chairman, EFY Enterprises Pvt Ltd, congratulated the winners and said, “EFY is happy to be associated with ELCINA for the prestigious ELCINA-EFY Awards. Both ELCINA and EFY have been set up for more than 40 years with the common objective of promoting electronics industry in India, including electronics hardware manufacture and services.” He informed that EFY has also joined hands with ELCINA to organise EFY Expo on electronics, whose third edition will be held in February 2013 at Pragati Maidan, New Delhi.

About EFY Group:
Over the last four decades, the EFY Group has become synonymous with information on cutting-edge technology. Starting with its flagship publication, Electronics For You, which is South Asia’s most popular electronics magazine, the group now offers a bouquet of specialized publications like Open Source For You, Facts For You and Electronics Bazaar and web portals such as electronicsforu.com, efytimes.com, bpotimes.com, linuxforu.com, electronicsb2b.com and eleb2b.com.

The group also publishes directories and books, and organizes several leading technology events like Open Source India and EFYExpo. The EFY Group has offices in Bangalore, Chennai, Kolkata and Mumbai. Besides, it has representatives in Ahmedabad, Hyderabad and Pune. It also has distributors in the South East Asian countries. For more information, visit https://www.efyindia.com.