Home » EFY Felicitates Dr. Ajay Kumar as the Electronics Leader of the Year

EFY Felicitates Dr. Ajay Kumar as the Electronics Leader of the Year 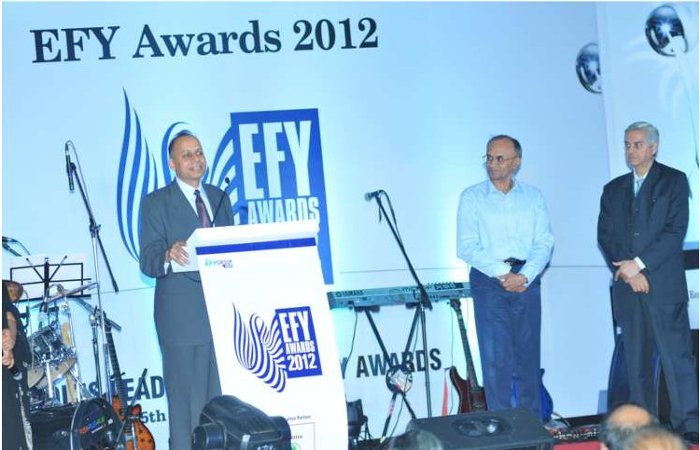 Dr. Ajay Kumar , joint secretary, Department of Electronics and Information Technology, Government of India is one such important person, who has contributed to the growth of the Indian electronics industry in more than one way. Dr. Kumar has supported the growth of domestic electronics manufacturing on various platforms and has encouraged allied industries to create a base for the the Indian electronics industry to grow. He is credited to have encouraged the SEZ developers to explore the possibility of developing Electronic Manufacturing Clusters as ESDM is likely to attract significant investment in future, especially in the wake of the new policies announced by the Government.

Dr. Ajay Kumar has acted as a bridge between the government and the industry and has played a crucial role in conveying the measures that the government has been taking for the Indian electronics industry.

Accepting the award, Dr. Kumar said, “It is great that the work the government is doing in promoting the electronics industry has being recognised by the industry. The industry is seeing its second revival, if I may say so, and in the next 10 years or so, we can revive the glory day of the Indian Electronics industry.”

Apart from this, EFY Awards 2012 were presented across 26 product categories to brands voted by the readers of Electronics For You magazine and Electronics Bazaar. The awards also featured six special categories, selected by a jury of four members.

Ever since its inception in 2004, EFY Readers’ Choice Awards event, is eagerly awaited by the industry every year. The aim of EFY Awards has been to motivate, support and recognise outstanding brands, organisations and individuals who have furthered the growth story of the Indian electronics industry. The awards have evolved with time in response to the demands and suggestions received from the stakeholders of the Indian electronics ecosystem and our valuable readers.

Here’s a list of winners of EFY Awards 2012:
Capacitors: Vishay

Electronics Organisation of the Year: Panasonic

Best Initiative by a Government Organisation: Department of Electronics and Information Technology

Certificate of Excellence 2012 for Emerging Organisation of the Year: MyBox Technologies Pvt. Ltd.

Certificate of Excellence 2012 For Government Organisation of the Year: Centre for Development of Telematics, Government of India

The procedure for nominations and finalising these awards is very simple. As the name suggests, these are based purely on the nominations invited from the readers of ‘Electronics For You’ magazine, recorded and till 2009 analysed by the leading market research agency in India, IMRB. The whole system is totally transparent and based on readers’ perception towards a particular brand.