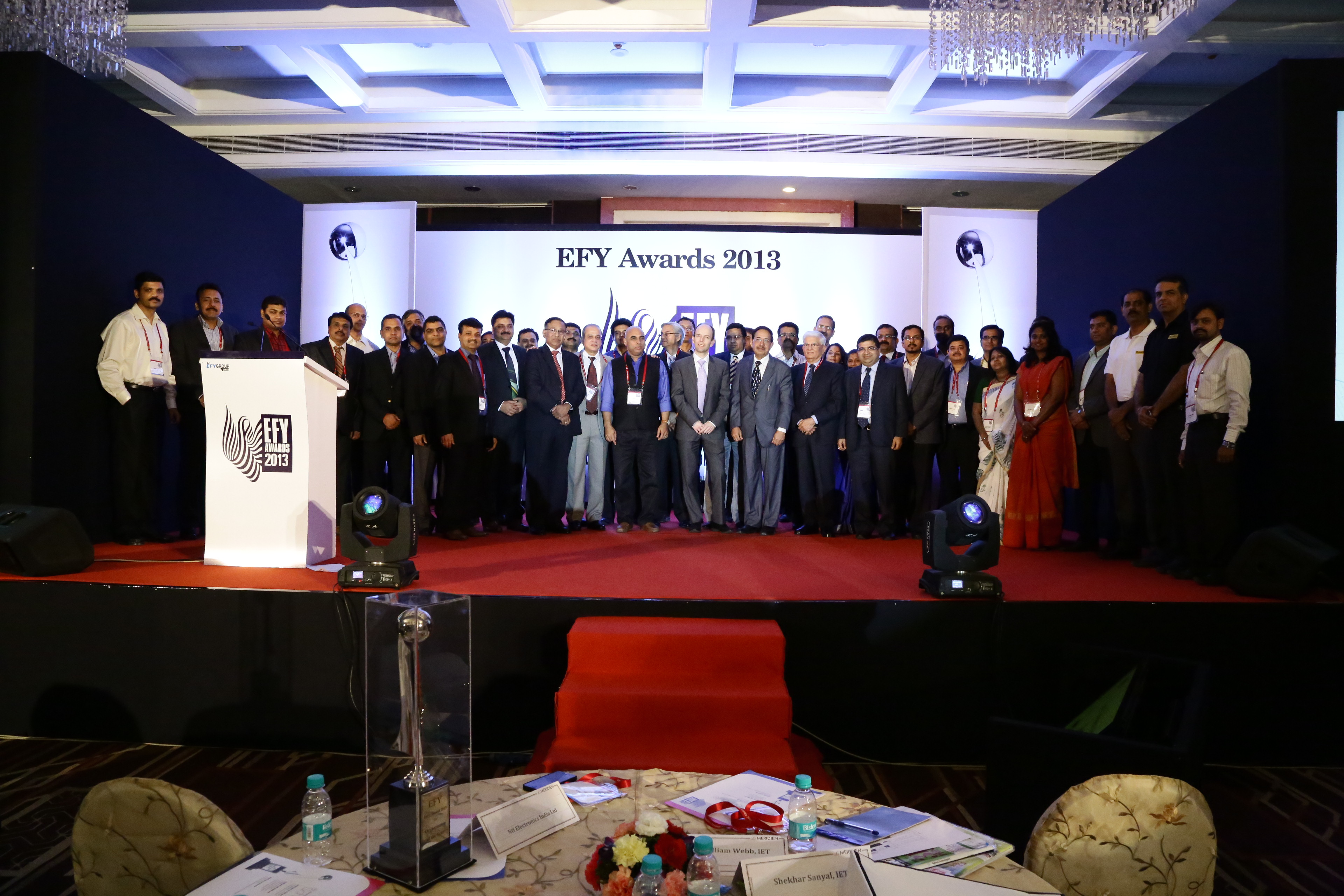 Department of Electronics and Information Technology, Government of India, has been recognised for exemplary policy initiativesThe EFY Group, a premier publishing group for the electronics industry, presented the 10th edition of the EFY Awards on March 14 at a ceremony held in the Le Meridien Hotel, Bengaluru. The award, Electronics Leader of the Year, has been won by Vinod Sharma, managing director, Deki Electronics.Receiving the award, Vinod Sharma said, “It is good to know that the industry likes and values the efforts I have put in during the past few years to boost electronics manufacturing in India.”A special jury award was given to the Department of Electronics and Information Technology (DeitY), Government of India, for its exemplary policy initiatives.

EFY Awards aim to recognise brands, organisations and individuals who are leaders in their respective segments within the Indian electronics industry. The awards were presented across 26 product categories to brands voted by the readers of the Electronics For You and Electronics Bazaar magazines. Awards are also given in six special categories, where the winners were selected by a jury of six members.

Receiving the Lifetime Achievement Award, T Vasu, director, Tandon Group, said, “I’m privileged to receive this award from EFY, the leading promoter of the electronics industry in the country, second to only DeitY, to which we owe our entire life. EFY Awards are certainly an encouraging catalyst.”

Rajan Shringarpure, managing director, and director, operations, Vishay Components, winner of two awards in the categories ‘Resistors’ and ‘Diodes & transistors,’ said, “We are, of course, delighted to receive two awards. To be voted the best in India in the two major products of our portfolio, by people in the industry, is a feeling that is very fulfilling.”

Accepting the award in the category of ‘Oscilloscopes’, Kapil Sood, managing director, Tektronix, said, “It’s a fantastic feeling as we have been winning this award for the last 10 years in a row. EFY is a very well respected and widely read magazine, so its readers voting for us over all these years is significant for us.”

C-DAC won the award for being the ‘Most Popular Training Institute’ for electronics. Accepting the award, Dr Kumari Roshini V S, associate director, C-DAC, said, “It’s a very proud moment for all C-DACians to receive this award. Our focus in education training is to impart whatever technology we have developed as part of C-DAC to the academic community as well as others.”

for Innovation in Electronics

About the EFY Awards

‘EFY Readers’ Choice Awards’ were instituted in 2004. Encouraged by an overwhelming response from the industry, the Awards were made an annual event thereafter. The procedure for nominations and finalising these awards is very simple. As the title of the Awards indicates, the nominees and winners of ‘EFY Readers’ Choice Awards’ for the product categories are selected on the basis of voting by the readers of EFY. The votes are collated to assess the ‘Top 5 Brands’ and then the winner amongst them is selected on the basis of the most popular brand voted for. The respondents are from various segments — mainly from the electronics industry, as well as professionals and even associations representing different segments of electronics. In case of a tie between two brands for the same award, the case is referred to the jury, and the winner is selected on the basis of the jury members’ final vote.

In case of ‘EFY Jury Awards’, the jury is instrumental in deciding the winners for the special categories – ‘Electronics Leader of the Year’, ‘Electronics Organisation of the Year’ and ‘Lifetime Achievement Award’. The jury can also decide upon new categories. Here, the jury nominates individuals or organisations for the awards, and then a winner is selected through consensus, after discussions or through voting.